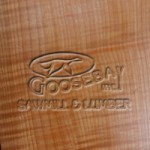 Bigleaf maple is the only Western species of the soft maples.  It is the largest maple tree that grows in North America and derives its name from its leaf, which typically grows up to 10 inches in width.  It is generally softer than the Eastern maples with a relative hardness of 850.

The wood is fine-grained with a reddish-white sapwood.  Sometimes there is a grayish cast to the wood.  The heartwood is light pinkish-brown.  Bigleaf is most prized for its figured or “quilted” figure (as shown in our photo.)  It generally has all the favorable machining qualities of the Eastern maples; planing, shaping, boring, and turning.  It finishes and polishes well.  It is used for furniture, veneer, paneling, musical instruments, moulding, and turnery.